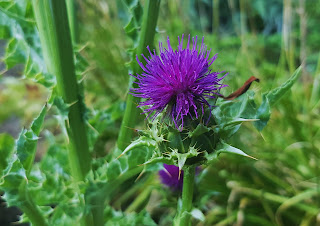 In their coat of arms, the Scottish Order of the Thistle, still presents it proud and majestic: the milk thistle. A national flower with expressiveness. “Nemo me impune lacessit” or in English: “No one attacks me with impunity” is the official motto of this ancient Order of Knights. Which equally reflects the historic unyielding spirit of both, the Scottish nation and its flora. It is a rough yet breathtakingly beautiful natural landscape that still characterises the country and annually attracts about 15 million tourists.

A special recommendation in this regard is the much-praised lake scenery of Loch Lomond. Being part of the Loch Lomond and the Trossachs National Park, the landscape extends approximately 23 km North of Glasgow between the Scottish Lowlands and the edge of the Southwestern Highlands providing an ideal entry route for travellers and hikers heading to the country’s Northern mountain region. Paths along this route are not only bordered by some of Europe's most beautiful heathlands, which thanks to the mild Scottish climate bloom until early autumn. Similarly, a stunning network of up to 50 major rivers and streams as well as numerous mountain ranges and dreamy valleys make the National Park a picturesque hiking entree before the actual ascent to the sublime rocky passageways of the Scottish Highlands.

Wild and untamed, this landscape tells about the origins of a folk that is so much more than haggis and whiskey. Although both might indeed be sacred to the Scots, it’s rather the sounds and tales of the Gael that echo from Loch Lomond’s hills. Legend has it that the Celtic tribe, which strongly influenced the culture of Southwest Scotland since ancient times, is descended from an Egyptian princess named Scotia.

A national flower with symbolic character

By ship, the pharaoh’s daughter and her people, the Scoti, are said to have once reached the Scottish West Coast after leaving ancient Egypt in the wake of Moses’ exodus in order to find their own promised land. And until today, Irishmen and Scots are arguing about where the mystical figure of Scotia might have landed first. At least, they agree upon her nickname which in both Gaelic countries is stated as “The Wee Flower”. A nickname strikingly resembling the title of one of Scotland's three unofficial national anthems.

We are talking about Roy Williamson's folk classic “The Flower of Scotland”, in which the composer patriotically regales about the Scottish War of Independence against the troops of Edward II, King of England, during the 14th century. The song honours Scotland’s national heroes William Wallace and Robert the Bruce, who later got tragically staged in Mel Gibson’s cult film “Braveheart”. In terms of content however, the song also is a melodic memorial for the courageous Scottish youth which back then raised arms in love for their country and partially paid with their lives for it.

The thistle as a Scottish national symbol as well as its association with the Order of the Thistle for sure was a further source of inspiration for Williamson while picking up a song title. History lovers fond of Scotland’s founding legend besides suggest the song may be a subliminal ode to Scotia’s unruly spirit that made her choose exile over a life in ancient Egypt’s royal society in order to be free. Her rebellious legacy to the Scottish people and their unbroken quest for independence maybe?

Scotia’s grave though is located in Foley's Glen, a valley in the County Cork in Ireland. Its landscape is still known to the Irish as “Gleann Scoithin”, Valley of the Little Flower Scotia, with Scotia's husband Goidel Glass being worshipped as Ireland's founding father and inventor of the Gaelic languages by the locals. The first landfall of the fabled couple however, and Scottish pub scholars strongly insist on that, did take place around Loch Lomond on the Scottish West Coast, not in Ireland. Scotland’s rough coastal terrain probably was too impassable for a settlement back then though, which was why the Scoti decided to reside on the Irish side of the Scottish-Irish Sea.

But it didn’t take long before the tribe returned to Scotland following their victory over Ireland’s former ruling tribe, the Thúatha Dé Danann. And every wanderer who has followed Loch Lomond's rivers for a few hours, understands, no, feels very intimately why they returned. For the grass may be greener in Ireland, but the untamed elemental forces of nature are notably stronger and way more enchanting in the wild vastness of Scotland. A sight you definitely will learn to miss once you laid eyes upon it.

The Heart of the Highlands

If the mythological figure of Scotia really existed, she most certainly could not help falling in love with the Scottish Highlands and the valleys below as well. Incidentally, this also applies to many artists and poets. Robert Burns, another Scottish national hero and besides Sir Walter Scott probably the most important poet in the country’s history, once expressed his admiration for Scotland’s rocky North in the poem “My heart's in the Highlands”. And like he lost his heart to the North, it probably happened to many, who left Loch Lomond behind to climb the steep paths into the Caledonian heights. For the muse truly is enthroned on the summits of Scotland, which have been subject of lyrics and poetry numerous times in the past.

A good start for exploring the Scottish Highlands besides the West Highland Way of Loch Lomond is the city of Inverness. As Capital of the Highland district, it offers an ideal location for all hiking destinations in the local area. The trails also will take a wanderer along one of the most famous Scottish Lochs, Loch Ness. If you want to fancy your luck trying to get Nessie in front of your camera, the South Loch Ness Trail probably is the best choice. It expands over 59 km from Torbreck and the villages of Dores to Whitebridge and Fort Augusts. The route can easily be split into smaller day hikes, 11 to 16,5 km each, and will provide hikers with sights such as the Caledonian Canal, the Glendoe-Falls as well as numerous castles and Lochs. Last ones can also be explored in particular over the Trail of Seven Lochs. Those mainly include

although there is a fair amount of smaller Lochs to see on the approximately 80 km long round route. No matter which route you might pick, you'll breathe highland air in every case.

In the solitude of the mountains, between highland cattle and lowland valleys, the nature-loving spirit sometimes also stumbles over rare Pictish craftsmanship. Only fragmentary are their relics preserved today. This however in form of most  impressive stone monuments, visible to everyone who takes the time to find them. You don’t even have to head for the Highlands directly to discover them.

Mystic Moments on the Isle of Skye

If you, for example, move North-West of Loch Lomond, deeper into Scottish coastal areas, the foggy passages of the Inner Hebrides may open up to you. On its largest island, the Isle of Skye, whose name translates to “Island of the Mist”, there lies the trailblazing Clach Ard. Located almost 10 km behind the island's capital Portree, it marks one of the few Pictish symbol stones that cannot be found in the East of Scotland. In contrary, does it lead to all the more fascinating sights the West Coast has to offer.

Leaving the Pict stone in Northeast direction, you will first reach the famous Old Man of Storr – a pinnacle on the Eastern shores of the isle almost artfully shaped by the tides of the millennia and known as the mountain guard of Skye. The ascent to this giant specimen of a limp leads over an equally rugged valley below called Sanctuary and, depending on your physical condition, can take up to one or two hours. A brave mountaineer however will be rewarded with a magnificent view over the Loch Leathan and may find a fresh updraft to then explore even another treasure of the Isle of Skye. A sharp change of direction to the Northwest is needed for wanderers to reach deeper into the Pictish territory of the island and get to the valleys of Fairy Glen near Balnaknock.

Fairytale-like indeed as any visitor, who once set foot into the vicinity of the valley’s stone circles will testify. Myths of the banshee, the fairy woman, are becoming more alive than ever at this place and one might start to wonder whether the legends about mythical creatures in general might not in fact be true. Even some stories about druids, witches and wizards could have their magical origin in Fairy Glen’s ritual stone arrangements and relief-like hills provided by Scotland’s counterpart to the misty isle of Avalon.

The legacy of Picts, Celts, Vikings and… Egyptians?

At least in thought, the memory of ancient rites exercised at this place cannot be avoided. Rites that may have been partially taken over by another folk that once settled on the Isle of Skye, even though being rather located in the isle’s South. An interesting fact given that said folk once sailed to Scotland from the North Sea. Indeed, it were Vikings, who shared the island with the Picts for a certain period of time before merging with the Scottish natives to a common island population later on.

The footprints of the Norsemen are all the more present the further one travels into the northern Regions of Scotland. This not only goes for the Orkneys and Shetlands, which Norwegians claim actual parts of Scandinavia. Especially around Elgin and Inverness at the East Coast of Scotland, where also Nessie haunts the waters, the legacy of Vikings still is quite alive. However, about such Norse hikes shall be regaled another time. For the moment, we want to return from our spiritual and ghostly excursions on the Isle of Skye and have a wee rest at the Loch Lomond Distillery. Doing so, we may notice that this whiskey distillery is located on the banks of Loch Lomond in a suspiciously Egyptian-sounding town called Alexandria. After a glass of Glen Scotia, one of the distillery’s famous brands, the bagpipe player's kilt at neighbouring table might start to seem suspiciously Egypt. Why so, probably must be pondered in detail with another glass of whisky. In that sense: 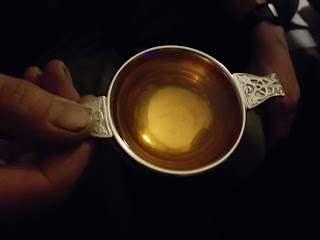